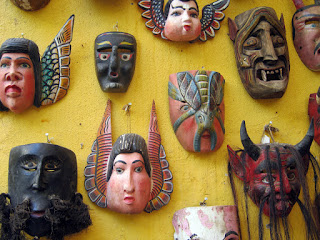 I realized on the cushion this morning (a habit I’ve pledged to re-begin for the entire month of August): I’m not fixing anything on this spiritual path. I’m just uncovering who I really am. I could feel my shoulders relax and my monkey mind calm at the thought.

I’ve been hiding her, as if ashamed, afraid of her power. She tugs on my skirt. It’s the me who, in first grade, could have 'run this entire school,' so said my teacher Miss Casula. It’s the me who stood up to my bully father. And after seeing him back down, a sheep in wolf's clothing, nothing was the same.

‘Remember?’ the little girl says, looking up at me.

That girl’s got things to do, places to go, works to create, truths to proclaim. 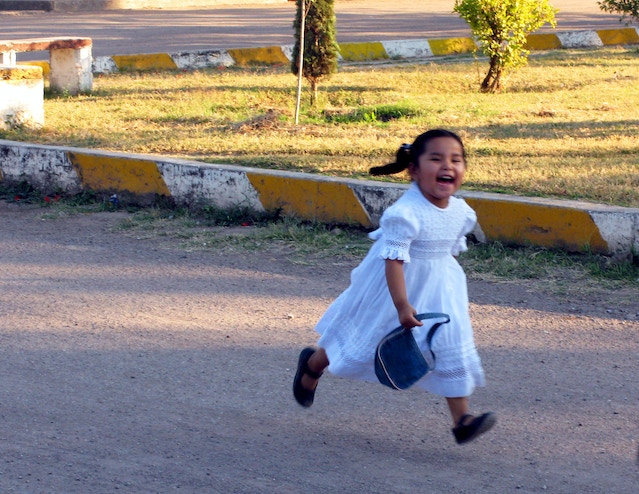 Though the messages of the past ring-out like it was just yesterday: Don’t upset your father, don’t overshadow your sister, take care of your little brother, don’t ask too much of me.

That’s Mom’s voice:  subtle, demure, just like her, never showy or direct. She probably had no idea she was sending such messages: a scowl of admonishment when I demanded she look at my art collage, a pat of approval when I sat still in front of the nightly news, a song of praise when I cleared the dinner table. I would do anything to please my Mom. She is in me now.
But if, over time and years of therapy and re-parenting, I had rebuilt some of my youthful power, it got knocked back out of me in Mexico, immersed, submerged as I was in a culture of paternalism and machismo.

I had to plead with the mayor: ‘Deja me trabajar,’ let me work! I was becoming one with the people in their struggle against the powers that be. After the news came from the Peace Corps bosses that I would be transferred to the capital or sent back home, I had to scramble. I would not, could not go. I needed the support of the townspeople. Surely they’d prefer I stay and try to do some good in their pueblo. Surely they would make the case for me.

‘Si, seguro,’ yes, of course, Anna, assured the Mayor's right hand man. I had prepared the sustainability training for the city functionarios, a task to make myself useful, justify my existence. This would be my chance to show my value. I had my PowerPoints translated, my exercises defined and my script ready, and I’d gotten myself mentally psyched-up to face my audience across the language divide. But again and again, the training had been postponed.

I was beginning to learn: Yes is not really a yes, guerrita, little white woman.

I had to be relentless, come back again and again, careful not to show any sign of weakness. Though simply forcing myself to wait in a chair outside the mayor’s office, and being passed over three or four times while continuing to smile and make small-talk with the with Julio the gate-keeper and the sweet senoritas as they stamped papers, endless mayoral sayos, stamps of approval, was not a winning strategy. It took me down notches, undoing all the assertive work I’d done. But sometimes I just didn’t have the energy to beat down the door. That’s just when I lost face, backing down from standing up for solar cookers in Puente Bajo where they couldn’t afford cooking gas, or the health clinic in Magdalenas or the trash pickup in Canada Grande. How did I know what was most important to run this municipio, really?

That was my Mexican Mask, doubtful, docile and sweet, though without the lipstick.


So much energy was required, so much confidence and assertiveness, to pull-off the simpatico mask  and just be myself. I was grappling with my power (or lack thereof) every single day. How much could I display, as a female, without offending someone, violating the customs, overstepping the bounds and being seen as the mala mujer? Containing and second-guessing myself sapped even more energy.

I would arrive at the Presidencia with adrenaline fight coursing through my veins and a commitment to myself to be heard. But as I sat in the waiting area, minutes and hours ticking away, amid the crisis (same word in Spanish) del dia, I could feel my aspirations deflating like a balloon. The door would open and a waft of AC would seep out, as the men with slicked hair and carnitas bellies spilling over shiny silver belt buckles marched in, butting ahead of me unapologetically. The door would shut tight behind them, leaving me with the camposinos and our collective sigh of ni modo. So it goes. I would convince myself that’s where I belonged, with the people, the oppressed versus the oppressors. Though I was getting nothing done out there.

If I were lucky, Julio the gate-keeper would apologize. ‘Lo siento, Anna, un dia loco, como siempre,’ a crazy day like always.

‘No problema,’ I would respond, like a liar, a sheep in wolf's clothing, standing over his boss’s calendar book spayed open on the table, hoping for a few minutitos of time.

‘Mejor in la manana, temprano,’ better in the early morning, he would say, encouragingly. But I knew it would be the same drill all over again. I would get out of bed early for nothing. That’s when I’d slink out, beaten like a piñata, wade through the sea of camposinos crowded in the hallway with their worn solicitudes for the roof laminas and food dispensas. Down the stairs I’d go, past the mural of Rioverde in its orange grove heyday, slipping past the guards, out the heavy doors, into the blazing morning sun, and wander the plaza for a while wondering what to do with my time and the adrenaline energy pulsing through my veins with no place to go.

But today was different. I didn’t care. It was best, I was learning, not to care what anybody thought. Not to care about busting the norms, fitting it, becoming a 5 on the god-damned Peace Corps integration scale.

I didn't want to be like a Mexican who, according to Octavio Paz, "shuts himself away to protect himself; his face is a mask and so is his smile. In his harsh solitude, which is both barbed and courteous, everything serves him as a defense: silence and words, politeness and disdain, irony and resignation.”

I would not be resigned. I had to have the mayor’s commitment to the EcoFeria. And I was going to get it. Yes, they had signed the solicitude, in a dog and pony show stunt at Parque Revolution, snapping photos for the press. But now they had to make good on the promise.

‘Necesito ver Ruben,’ I said to Julio, unsure if the literal translation was correct. But I didn’t care about that either. I need to see Ruben, that simple. I stood over Julio’s desk and I was not going to budge.

He glanced up with a pained look on his face, his unibrow furrowed. And I repeated myself, placing the signed solicitude on top of the agenda book open on his desk. ‘Necesito ver Ruben hoy,’ today.
Suddenly the door to the inner sanctum opened and Ruben was standing there, like the Wizard of Oz coming out from behind the curtain. ‘Venga, Anna,’ he said, inviting me in, nodding at Julio. The senoritas looked up from their stamping, red lipsticked mouths agape.

The door shut behind me. This time I was inside, the AC splitter humming, ready to do business.
Posted by Anneseye